My first weekend back in Tassie and I spent it in the royal. It was not without it's treats though.

A pretty sunrise which my photos do not do justice to at all. 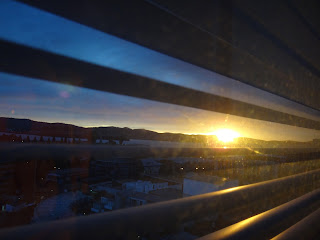 Dave and I got eight visitors! We felt very loved. So many lovely messages too. Thank you everyone :) 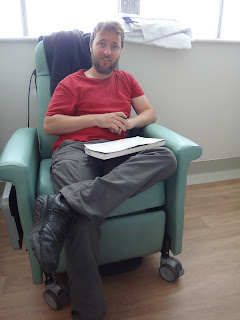 Dave doing a lovely job of filling out my meal orders.

On Saturday for some unknown reason that I certainly wasn't going to question I was told that they did not need to take any blood. Great.
On Sunday however they had to take my blood twice as the first batches labels got lost. I didn't mind for two reasons:
1. Luckily as my port was all hooked up they could just take it through my port - so no needles.
2. They had me on plenty of morphine and methadone. I didn't mind much of anything!


One needle that I was still having daily was for clexane. This is to help prevent blood clots while I'm basically lying around all day every day. This has to go into my stomach, bottom or thigh. It always stings. As my stomach was enormous and bloated from all the fluid build up, it made the injection even more uncomfortable.
On Saturday I refused to have it.
On Sunday, one of the many doctors I was in consultation with agreed it was OK for me to refuse it, particularly if I could do a little bit exercise instead. Well that as you probably know is a bit like inviting a child to a chocolate shop. I started going for walks down the stairs, and then back up the stairs. Not all the way back up to the 9th floor, but about half way. Very slowly. Always with the company of Dave or Mum. Often just as soon as they'd arrived. Via the stairs. I'm cruel like that.

I had an X-Ray. This was to have a closer look at my abdomen and hopefully clear up the 'to drain or not to drain' debate that had been raging since I was admitted. I certainly wasn't going to push a procedure that involved puncturing me if it wasn't completely necessary. However I was in considerable discomfort. The doctors felt it was a very borderline case. It was getting less borderline all the time though. 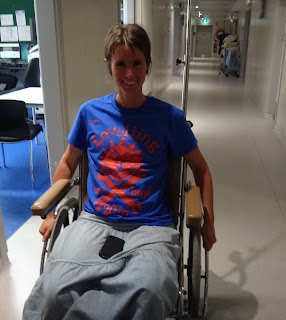 Back in the chair for the X-Ray. I finally have my Band T-shirt on. The Levellers - my most recent gig - just the previous week. I've seen them many many times and they are always brilliant. For this gig I sought out somewhere out of the way to sit, where I would not get knocked in to, as I was feeling quite delicate by then. Another awesome thing about this T-shirt is that when I asked about the conditions and wages of the workers who made them, I was given a decent answer - they had bothered to check and find out that they had indeed been paid a decent wage in safe conditions. 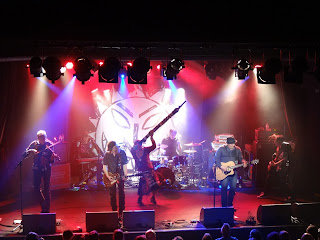 It might have been the didge player I was talking to. My goodness they are awesome live.