I hardly know where to start!

I have a lot to blog about. I've decided to break it down into a series of smaller blogs, rather than try and fit it all into one massive one.

So before I start, I'd better just let you all know that I am writing this from home, safe and comfortable.

I didn't blog during my holiday, and apart from a possible brief overview at some point, I don't intend to.
I had an amazing holiday. I enjoyed my chemo side effects clearing, albeit slower than I had hoped (looking back, my expectations were not realistic).

As my chemo side effects cleared however, other symptoms emerged. Mild at first, but gradually stronger.

Shortly before we were due to return to Australia, my symptoms got bad, and I muddled through the rest of my trip on the strongest stuff I could get from the pharmacy.

I had no doubt that it was the cancer. Of course a part of me hoped it was something else. Ever hoped beyond your wildest dreams you're going to be told you have bronchitis and a cracked rib? The thing about hope is, it doesn't have to be in the least bit realistic or likely.

We arrived in Tasmania on Tuesday. It felt good to be back. 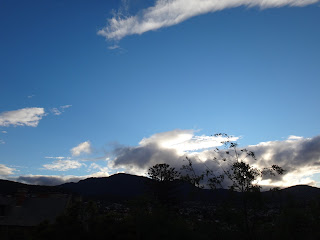 I had a CT scan on Wednesday. I had a lot of the elements of a CT and PET mixed up in my mind. The procedure went smoothly, but  I was feeling awful and only got worse as the day went on.

On Thursday at 9am I saw my Oncologist for the results. I was dreading it and also desperate for the treatment I'd need.

So my tumors seemed to have enjoyed the break from treatment. There is spread and/or new growth in my lungs, sternum, abdomen, pelvis and liver.

My Oncologist does not muck about. She admitted me to hospital immediately. This triggered many thoughts and feelings, but given that the main thing I felt was relief, I must have really needed it.

I was given, among other things, morphine, steroids, anti-nausea and they got some fluid into me too as I had not been able to eat/keep anything down.

Some things I was given orally, some as injections and some via my port. My port, which had not been used for 8 weeks, had become a little 'sticky'. This did not seem to concern my team very much, and given all that was going on, it didn't worry me nearly as much as it might have.

Thursday was very much about getting me comfortable, getting some fluids in me, meeting the various teams that would be looking after me in the next few days.

I spent a good chunk of the day down in 1A, which are consulting rooms, as they did not have a bed free for me in the wards. This was comfortable enough, but they finally got me all the way up to the 9th floor, where I had a large private room. The whole ward was brand new, having only been open 2 weeks. 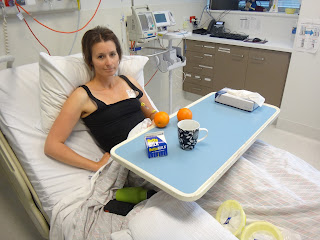 This is me still down in 1A. I managed to eat one orange and drink the milk. I didn't manage to keep it down though!

So Thursday certainly did not go to plan. I had not even unpacked from my trip and here I was in hospital. However, given the circumstances I think it actually went as well as it could have gone.
Posted by Felicity at 00:29