Friday was Chemo Day. At least I had no issues arriving on time for this one!
I had cetuximab, which is the one I was having before I went away, and was tolerating quite well, but we needed to ramp it up a bit, so I also had irinotecan. This is one of the chemo drugs I had back in May, just the once, my terrible round 13, that I tolerated so badly that my Oncologist stopped after one round.

So I was quite nervous about this. But at least I was having it in hospital this time, where the effects could be 'micromanaged'.

Part of that management was more injections, so the nurses, aware of my problem with needles, finally convinced me I'd be better off getting a 'butterfly'. And I was. It's a sort of mini cannula that goes in the skin instead of a vein, and as much as I was not looking forward to having it, it was fine, and actually made things much easier afterwards. 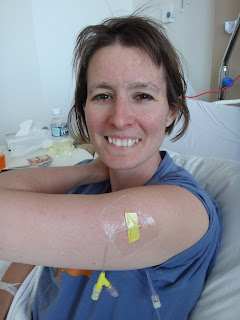 Me showing off my 'Butterfly'

I was also very happy to be informed that my port was flowing correctly again, so no further action was needed there.

I've heard this rumor that people can get bored in hospital. Well, it probably very much depends on why you're in. I hardly got a moment to myself.

I'm not complaining about this at all. I'm very lucky to be getting great medical attention from an awesome team. I really can't say how fantastic all the Doctors and nurses were. 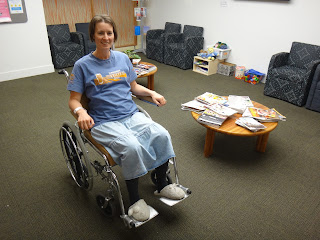 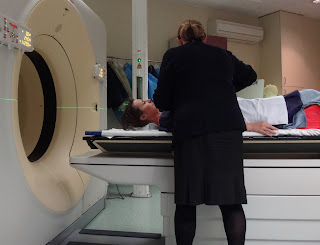 Dave managed to sneak a picture of me being mapped out for radiation. They carefully make a detailed plan of exactly where they intend to 'zap' me. They even give you a tiny dot of a tattoo! So I actually got my first ink today. 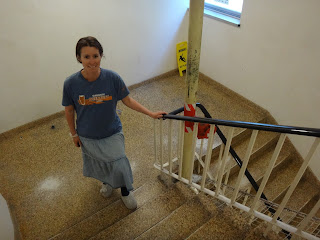 We managed to ditch the chair and sneak back to my ward via the stairs. You can see my T-shirt in this picture. I had a band T-shirt all planned for round 21, but of course, I'd planned to be at home that morning. So I didn't have it. This is my Tasmanian Beer Festival 2009 T-shirt. Our first year living in Tasmania, and a great day out.

I got my days a bit mixed up, and forgot to include in yesterdays blog that I had an ultrasound. I'd never had one of those before either (and that would have been my first trip in a wheelchair too). It was quite fascinating. Lovely team too. I couldn't help but reflect that I should be having ultrasounds for very different reasons at this point in my life. This one was to view all the fluid that has built up in my abdomen due to the tumors, and to choose a good point in my stomach to insert a drain.
Posted by Felicity at 02:07