Yesterday I did things. That's a novelty at the moment.

I wouldn't have done them without lots of help and encouragement from Dave. I would have just stayed in bed. And regretted it.

But instead I attended Yoga at 9.45am which is basically the middle of the night for me now. Showing up and participating are not the same thing. I ended up doing a guided meditation instead of usual yoga stuff - but it was really lovely.

Then I went to the gym. As I walked slowly from the yoga studio to the gym I noticed that my legs felt fine. They could have belonged to a different person. Or the old me. Actually the old me was plagued by joint pain so yesterday they felt fabulous - pain free and just normal. So I tried to focus on that.

At the gym I did half my program in twice the time. But I was there. Which was great.

Next I attended my support group meeting. That's a Cancer Council thing - not sure if I've mentioned it before. But it's really good.

Then home for a rest. And then out again! Round friends for dinner, which was really good.

I did all this safe in the knowledge that I had nothing on today, so could rest as much as I needed.

When I woke up this morning at 10.30am, I felt fine. Normal. And that feels amazing. I basked in that for a little while, thinking I would get up soon and do things today too. Until my stomach started churning again. But I still got up and made myself breakfast. Then I couldn't eat it.

Still, I was determined to press on. It was a nice day outside - perhaps I would have a walk later. I had my shower. After that, I interpreted my latest stomach churnings to be hunger. So I started to peel an orange. Then it all became too much effort so I went back to bed. Until 3pm.

Dave finished preparing the orange for me then. It tasted so sour I couldn't eat it. It wasn't that sour - it's just my tastebuds being messed up.

I had lunch at 4.30pm. Half a bread roll. I had dinner at 7pm. Some broccoli and lettuce. The eating doesn't worry me yet. As long as I get my appetite back at some point I will make up for it then.

It's 11pm now, way past my bed time, but I wrote most of this much earlier so I wanted to get it done. Otherwise it won't. So many things in my life don't get done these days. I don't like it. It felt so good yesterday, ticking off things in my diary instead of crossing them out. Well I have things I'd like to do tomorrow too so time for bed. 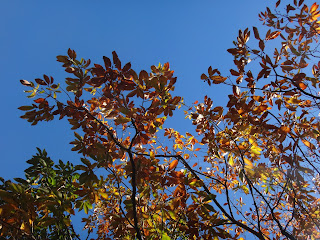 This photo is from last Thursday, and totally irrelevant - but you know how I like to include at least one picture.
Posted by Felicity at 06:13