Earlier in the week I sent an email to my oncologist reporting all the side effects I was experiencing from my new regime.

This lead to a sort of 'upgrade' to my appointment on Thursday. Instead of a basic check up with a nurse, my appointment was rescheduled and I was met by two nurses and my oncologist.

They said for me to complain it must be bad. I was a little surprised by this as I thought I've always been a fairly diligent reporter of symptoms. I suppose there were quite a few more than usual.

And come to think of it, I was more scared of 'the next round' then I've ever been, apart from perhaps the first one.

And also, I've always managed to go into each round almost fully recovered from the last one, whereas I was ranking myself as 75% recovered at best, and now looking back, that seems generous.

So perhaps some of that was coming through in my email too.

I had a bad time with round 13. I was relieved when my oncologist re-arranged my treatment plan.

We took out one of the drugs giving me the worst side effects, plus my bottled stuff. She's assured me this will not reduce the effectiveness of my treatment, which is very important to me - I was also assuring her that I would happily keep going with it if its the best way to tackle things.

But I was really was very relived to not be facing another hit of 'the lot'.

Thursday was a hectic day, and I'd had a terrible nights sleep the night before. I remember feeling rushed off my feet. That is partially due to the fact everything seems to take me so long these days. And I need more sleep than average. I remember fleetingly thinking back to past 'pre-chemo-Thursdays' They were similar, but not exactly the same. It's always a busy day, but I used to be feeling better. I was still very fatigued, and my appetite was still not back properly. 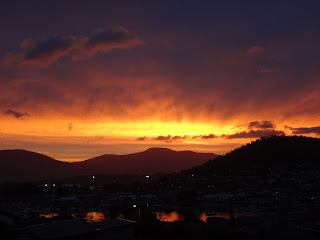 Still, I felt positive regarding the outcome of our meeting with my oncologist, and I did have several treats on Thursday too, including lunch with a colleague, walking the dogs, and this spectacular sunset.
Posted by Felicity at 07:03