For a little while in my mind now, I've been trying to adjust to a new normal. A normal where I get out of hospital and can't go for long bush walks. A normal where I need an afternoon nap every day. Where I can't do more than one thing in a day. I take a huge amount of medicine to manage symptoms and side effects. I can't do many things for myself. I can't drive. I get three or four 'good days' in a fortnight. A good day still means no more than being able to walk for 30 mins, and still needing that nap.

I have been on Chemo for over a year now. Fourteen months. So it's no wonder there is a certain 'normality' to it now. I've had a couple of small breaks in that time. The last one, the longest I've had, did not do my health much good.

But I was talking about it over lunch with a friend on Thursday and she encouraged me to fight again. And I'm glad. Its not a normal I want. And I went home and had a really good walk - a 30 min walk which included a steep hill. A walk I haven't done since before my holiday. And I booked into the gym for Friday.

So today I walked to town. This has been a staple of my chemo routine. Yes it's part of the new normal but it's a positive part. Then I went to the gym. I haven't been to the gym for three months. That is a long break. I was a bit nervous, but I went through a super light version of all my exercises and it felt great to have done it. Getting back to better things. Normal things. Real normal. Pre-cancer normal. OK, so it's Pinc Pilates I do now, but at least it's still going to the gym. And it's always good to see my colleagues too. 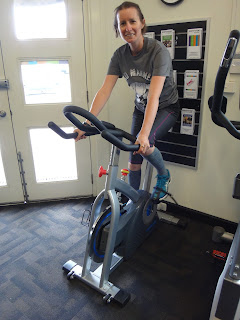 Warming up on the bike

Then Dave and I grabbed a quick take-away from Heartfood before rushing to the hospital for chemo. It was so busy in the ward when we arrived. It took a little while for us to get settled in and I was worried about what time we'd be leaving - late!

Today I wore my Bad Manners T-shirt from a very recent show they did at the Rebublic Bar for their 40th Anniversary tour. It was a real treat to see the legendary Buster Bloodvessel in action. 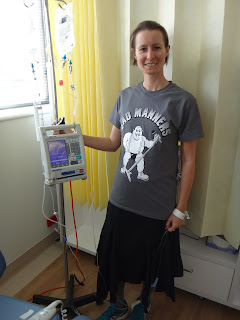 I got a surprise half way through my treatment. A treat, you could say. A doctor came and told me that they are not giving me any Irinotecan today as the side effects were so strong last time. And I complained! I want my treatment! I've said it before - as much as chemo is not a great thing to be facing - I'm very lucky to have it not only as an option (rather than being told that nothing can be done for me) but it is available to me. Not everyone who gets cancer gets the same opportunities as me. But I can have it again next time. I need to stay well during this process too. Once I have got my head around this I will be more grateful for the rest. Which I will make as un-restful as I can manage of course! I can look forward to feeling well for more days this fortnight and possibly getting more exercise and fresh air.

The air was pretty fresh today! I didn't manage a walk home but as we left hospital much sooner than expected and feeling much brighter than expected we did have a little walk around town. My fitbit tells me I've done over 10,000 steps today. I'm pretty pleased with that. 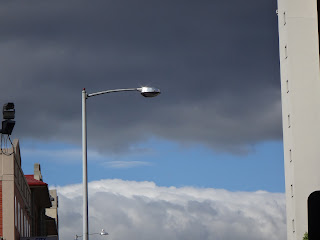 I took this photo in Liverpool street. I like the two different cloud colours.

I started driving again this week too, for the first time in about two months. Just a short distances to start. I've had the medical 'OK' for a while now. It was totally fine, and felt good to be doing it. I'd never dream of driving if I didn't feel 100% up to it. As much as it was great to drive though, it's better to walk.