I thought I was being smart by booking a PET scan at a slightly later time in the morning. That way I thought, I can have a sleep in and not be kept waiting for the stuff they inject me with to arrive from Melbourne like last time.

Well I did have a sleep in, which is the best way to skip breakfast if you have to. And I don't like skipping breakfast! I also skipped my usual morning exercise routine, as you have to avoid strenuous exercise before the scan too. Not that my exercises are too strenuous. Better safe than sorry though, and I told myself I would do them after I've eaten after my scan (without a doubt, eating would be the first thing I would do after my scan).

Sleeping in is not difficult for me, and it was quite refreshing to sleep in with a sense of achieving a goal rather than feeling guilty - perhaps I should schedule it in more often!


We arrived at the hospital in good time. And the waiting began. Then I get taken through and Dave can't follow due to all the radiation. More waiting in my little lead lined room. Then I get my cannula put in. Then more waiting. Then my cannula gets attached to a tube, and the hour long process of uptake begins, during which time I should move as little as possible. I'm getting really good at that - I nearly nodded off, but as I'm not even able to play on my phone I did find it a rather slow hour. 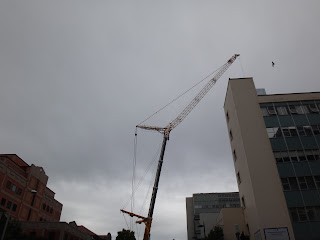 Liverpool St was closed for this crane to do its thing outside the hospital today.

After that the tube gets removed, I'm sent off to the toilet to empty my bladder, then another wait during which time the cannula gets removed.

Then the PET scan. I was a bit worried at first as my shoulder felt a bit uncomfortable - you have to put your arms above your head. 'This is only going to get more uncomfortable' I thought.

Then the last little wait. They brought be a sandwich and drink. I was hungry, but not that hungry. I had Dave's cooking waiting at home for me. 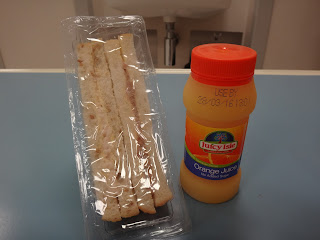 My chemo tablets have to be taken twice a day, after food. Ideally at around the same time each day. I usually have my first tablets after breakfast, but today I didn't have them until after lunch.

And I didn't do my exercises later.

And now we wait again. For the results. We'll find out on Thursday when we see the oncologist.
Posted by Felicity at 03:51