I wrote most of this on Friday. So it makes most sense if you read it with that in mind.

Today is the anniversary of my bowel surgery. While I'm not really that concerned with marking off this date, it's etched in my brain, simply because I often find myself filling in forms that require me to list the dates of previous treatments etc, so it's taught me to remember stuff like that. Usually I'm terrible with dates.

Today was also the start of Round 19. We were booked for 10am and we were only 10 minutes late! 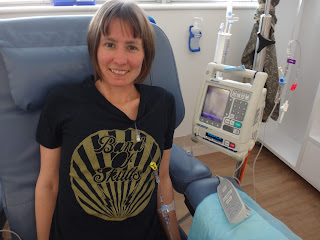 Today I wore my Band of Skulls t-shirt, that I bought when we saw them play at the Corner Hotel in Melbourne in July 2012. It was a fantastic gig. The t-shirt is black which these day's I try and avoid if I can (as so many band t-shirts are black) and it has no tour dates. But it does remind me of the night, which was great. It's the only time I've had a chance to see them but I would see them again if possible. They've had new material out since then and it's all been good.

T-shirts are actually a rather poor choice for chemo with a port as I have to stretch the neck out quite far to let the nurses access my port. I'm enjoying the theme though so I'll will stick with it anyway.

I was tired even before I started chemo, and I soon started to feel the effects of the treatment and become fatigued. I did still manage to get to the gym afterwards though, and walk home, although it was far from the most energetic session. I think if it wasn't for the new studies that show that exercise on the day of chemo can improve delivery, I'd probably be telling myself I can give myself the day off on chemo day.

As we started walking home, I became hungry (it was lunch time) and we were debating about where I could grab something to eat. I didn't want to go too far out of our way as I was tired and we were on foot, but I am a little bit picky about where I eat. Then we turned the corner and saw Big Henry's food van! Perfect! I love this new food van thing happening in Hobart. 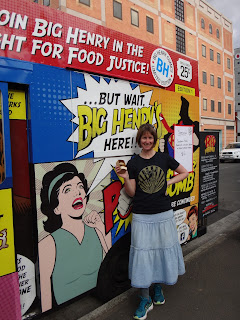 I thought I would do something I don't think I've really done before and give you all a snapshot of the side effects I'm feeling right now. Just because I get asked a lot (which is fine), so I guess some people might be interested.

I wrote about my side effects. In detail. And it was a LOT of writing. Easily enough for it's own post. And I felt a bit funny about it too. Like I was complaining. Even though I wasn't. And even though no one ever makes me feel like I'm complaining (apart from perhaps me). So I've deleted it again, just leaving you all instead with the info that I do have a bunch of side effects I'm dealing with. I try to avoid thoughts like 'I wish I wasn't getting this' or 'I wish this would stop' because the side effects mean I am getting treated. And they mean I'm still alive. And they're not great but they're certainly not the worst thing in the world.
Posted by Felicity at 22:00