Technically, I have not been listing my chemo treatments quite correctly. I have had 16 rounds of chemo. But the first Cycle was the FULFOX6. The Capcitabine/Avasitin mix was Cycle 2. Each change in drugs is a new cycle.

Unless I have the cycles and the rounds mixed up. And perhaps this is only Cycle 3.1 not 4 as it's a modification of 3 not a total change....

And I think I'm a little set in my ways now. I'm happy with my own way of counting. It has been illuminating for me though. Despite my fairly diligent note taking I have totally failed to make a clear note of changes in regime. I've got all the content but forgot the titles. This highlights how tricky it can be for a complete novice of medical stuff, and how important it is to not only take notes, but the right notes.

My appointment for chemo was booked for 8.30am.

But there was a few problems with that.

First, as mentioned in previous blogs, the appointments may be early, but the drugs are not always very punctual.

Secondly, its very cold right now. This makes getting up early and moving at a normal speed quite a challenge. 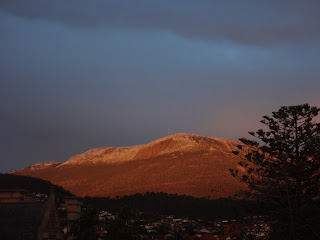 Sun and Snow on the Mountain this morning. Pretty. Cold.

But probably the main issue is that the best I ever feel from fortnight to fortnight, is of course the day before the next treatment. So? My sister is visiting. And the Bennies were playing at the Brisbane. I missed them last time as I felt too sick. So, well, I had to go! Right? 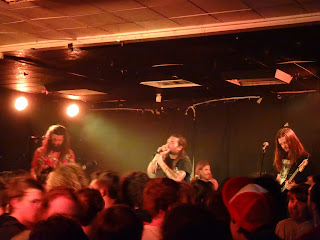 Fantastic show by the Bennies. The support acts, Axe Girl and Clowns were excellent too.

I arrived for chemo at 10am this morning. Despite running so very late we still walked in. Walking in has become a really valued habit for us. 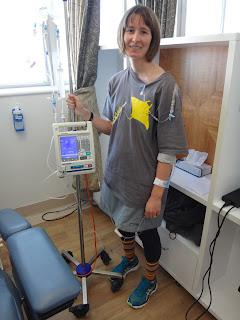 I'm not convinced about this photo. It's either the best or second best of a bad bunch. Dave persuaded me to use this one. I've run out of dresses. Sort of. I do have more dresses, but they are my work dresses or my two super posh dresses and I don't want to wear them to the hospital. So I need a new dress code. I've decided to go with Band T-Shirts. I love band T-shirts. A bit too much. This is my Pixies 2005 tour T-Shirt. We saw them at the Alexandra Palace in London. It was an utterly epic gig that we only just got to in time after work.
The skirt is a bit of a favorite too. When do you get to start calling things vintage? I got it in 1999 or 2000. Its sort of padded so its nice warm.

My drugs had already arrived but luckily (sort of) the nurses were really busy early in the morning and my lateness worked out quite well for them too. At least that is what they were nice enough to tell me.

After chemo, I went to the gym. Late. They were good enough to squeeze me in. Again. This is really good because it means a lot to me to get to the gym on a chemo day as it really improves delivery of the drugs, boosts your immune system, helps manage fatigue, and makes me feel happy.

After the gym, I went to lunch. On time!! Does that say something about my priorities? It was an informal work gathering to celebrate our Director Kellie heading off to Rio soon as lead physio for the Australian Rowing Crew. Exciting stuff, and as usual, I just love an excuse to catch up with my work team. Such an amazing bunch of people who have really had a massively positive impact on my life, before and after diagnosis.

By the time Dave and I walked home we were both pretty tired! We had a bit of a rest before having a lovely dinner with family and watched one of my favorite movies. It's late now but I really wanted to get this blog out today. Good night! Keep warm!
Posted by Felicity at 06:35